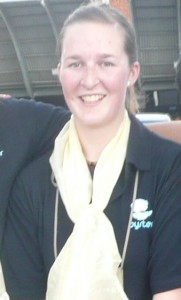 Leila spent 4 months as a volunteer teacher in a Nepali village with Oyster on her gap year in 2009/10. This is what she had to say about her typical day…

“Nepali black tea was the only way to start the day and after a couple of biscuits it was off to school. I always enjoyed the walk through the village to school and the usual greetings to everyone along the way. Walking with some of the kids from school was a great way to try out some of the language, which usually ended in laughter at either my pronunciation or lack of knowledge.

“Good morning Miss!” was all you could hear when crossing the courtyard, some kids even running to get in front of you to make sure you could see and hear their greetings. After a quick chat with the other teachers in the staff room I’d watch the children taking part in their assembly, which consisted of the new Nepali national anthem and then a prayer before they marched, in an almost organised fashion, back to their classes ready to begin the first lesson. After my lessons had met their often loud end, with a competitive game of hang-man, which oddly always consisted of the word “snake”, I’d walk home across the paddy fields.

The rest of the afternoon would be spent chilling out with Gunjan, the girl whose family I was staying with. We’d go to the river and do some laundry, prepare vegetables, ginger and garlic for dinner, do some lesson planning or just sit in the sun reading. I ended up heading to the local Buddhist monastery at the south of the village near the botanical gardens with the other volunteers most afternoons. We’d sit at the side and watch the younger monks practise their chants. It was a really great way to relax and take in the culture. After a few weeks of short chats with Serap, one of the older monks, we learnt that it was a new monastery which had been set up by 5 senior monks from a monastery close by, which explained why almost all of the monks were very young. A couple of them looked no older than 5! Nearing the end of our time in the village we were invited to sit outside with them all for Nepali milk tea with beaten rice, flattened rice kernels, often eaten with vegetable curry or fried with egg. It became one of my favourite afternoon snacks while in the village.

It got gradually colder in the evenings as we got closer to winter so we spent many hours playing various card games with Gunjan, Prashant and the other volunteers. Particular favourites were “Go Fish” and “Cheat”, both of which became very competitive! At around 8pm we would all sit in the kitchen and have dinner with the family. I was expecting to grow tired of Dahl Bhat, the national dish of rice, lentils and vegetable curry, but it was brilliant! Each day we had a slightly different vegetable curry depending on what was in season and growing in the garden from radish, potato, cauliflower to various pulses and a strange vegetable that nobody could tell me the English name for, but was really bitter.

Just before settling into bed I’d spend half an hour or so in front of the TV with the family, desperately trying to decipher the Nepali soaps and comedy dramas, which were apparently very good! After this, all that was left was to curl up in bed and enjoy the sounds of the insects incessantly buzzing right outside my window!”

Thanks very much for that Leila, a fascinating read about your gap year!