Winning the hearts of the locals in Nepal

Another brilliant account for you of life in Nepal as a volunteer. If you want to catch up on part one and part two you can do that here. Keep reading to find out how he unintentionally keeps winning the hearts of the locals in Nepal. 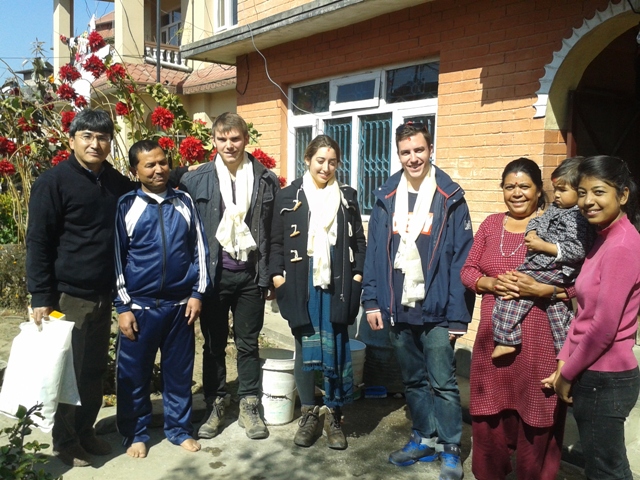 “The week in Godavari started off with the booms and shakes of massive thunderstorms passing through the valley. Heavy rain nearly swept away the path through the rice fields that guides me to school. Even in the stormiest weather, where thunder sounds like bombs being dropped, Godavari preserves its peaceful beauty.

After arriving at school nearly soaked to the bone, we dried off and made our way to class 7 for the first period of the day.  As it had been last week, the room was dark, almost impossible for the students to see their pens touch paper. Sam and I decided that it would be a good opportunity to teach them about England and then Canada. We scrambled together a few basic notes on our and I made an emergency call to Sophia to see if she knew what the national flower and food was of Canada.

Before the lesson officially started, a row of girls at the back handed me a bouquet of Rhododendrons, Nepal’s national flower.  I was humbled and thankful for the kind gesture, but still a bit uncomfortable knowing my ability to melt the hearts of 12-year-old girls. With the blushing girls back in their seats, Sam began his lesson giving an overview on England by naming the head of state, the national flower, sport and food. The kids jotted down notes in their barely visible notebooks before I took over and gave a lesson on Canada.

Over the last two months, I have come to appreciate what an exotic and exciting country Canada is to people.  When Nepalese ask where Sam and I are from, the response to ‘England’ is usually a soft head-bob while their excitement to hearing ‘Canada’ can’t be contained.  It was the same that day in Class 7 when I dropped the jaws of the students telling them how cold it can get. “-30 degrees!?” they shouted in disbelief as I spoke about my frozen hometown of Ottawa.

Since neither myself nor Sophia new the national flower or food of Canada, we agreed that the Maple Tree would suffice and that Poutine seemed like the only possible option. Bryan Adams, who has a massive fan-base in Nepal, was my famous Canadian and my list of outdoor activities included snowboarding, skiing, snow-shoeing and ice-fishing.  I continued with the theme of the extreme cold and spoke about the canal in Ottawa turning into the world’s longest skating rink in the winter. The idea of people skating to school and work blew the minds of these kids and made me miss my home.

After finishing my description of frozen Canadian tundra, it was the students turn to ask us questions. Sam finished answering questions about his family and home life before I was put under the spotlight. I was requested to write the names of all my family members on the board and was interrupted by one student asking for my uncle’s name. I responded ‘Duff’ and the kids were ecstatic about the exotic name, repeating it to each other slowly and ensuring they said it right.

The final question came from the same row of girls that handed me flowers at the beginning of class. “Do you have a girlfriend?” they keenly asked. I told them I did and said that she would be coming to Nepal next month. Though their hearts sank, the class had me write her name on the board and then requested that she come to the school during her stay. I agreed and said that I will let her know that she has been invited.

Due to the upcoming school Talent Show, all classes were off after 11:30am and Buddhasir, the dance teacher, was in charge for the remaining five hours. Students as young as grade three all the way to grade ten filled rooms and hallways to practice their dances.  Sam and I were one of the first groups to practice and seemed to be doing well enough that we were dismissed early from our lesson. The rest of the day was spent watching other students practice and filling in for the odd younger grade to play a session of hangman.

We left the school at 3:00pm and headed directly onto the bus that would take us to Lagankhel in Kathmandu. Once every 90 years, there is a Buddhist festival that has thousands of Buddha statues brought to a field where followers and tourists are able to admire the jaw-dropping event. Fortunately, we happened to be in Nepal for this once in a lifetime experience. Thousands of people marched through the muddy field throwing small change and bills into the hands of each Buddha statue. One-by-one, men would hoist up a statue and a smaller man would get inside it and march through a parade like a mascot. As they walked down the crowded street, on-lookers would throw rice and money and the walking Buddha in hope of good-luck.

Sam and I threw some change at the Buddhas and took several pictures before deciding to head out. Unfortunately, the only way out from the crowded road was to go with the parade. Following directly behind one of the larger Buddha statues, we paraded our way out of the festival dodging the odd handful of rice and coin. The two of us, short for our own national standards, towered over the festival and stuck out almost as much as the golden Buddha in front of us. Nearly half way down I squeezed my way through an opening and hopped over puddles of mud to get to the exit. Sam was fine with his positioning in the middle of the parade, smiling and waving at the hundreds of spectators filling the street.

Eventually, we got out and found the bus that would take us back to Godavari. Our program had warned us not to take a bus after 4pm as they can be too overcrowded and uncomfortable in rush-hour traffic. We got onto a bus that seemed to be full when we entered forcing the two of us to stand. In the next twenty minutes, another twenty people got on sandwiching me between Sam and an old lady sitting down. As I was shoved further and further back my body got lodged between this old lady’s thighs and my rear casually jammed in her face.

If this was in most countries, I am sure that I would have been yelled at for violating this elderly lady. In Nepal however, this was comedic gold and the entire bus was erupting in laughter.  The driver continued to slam on the gas and hammer the break sending me further into this lady’s space often causing her to push my butt cheeks away from her face. I cannot think of a time in my life that I have been physically and emotionally more uncomfortable that on this 90-minute bus ride.”

If you would like to learn more about the programme that Kenny was taking part in then have a look at our website.