The last week of volunteering in Sri Lanka – by Barbara Boylan

This is Barbara’s final week of volunteering in Sri Lanka, and we are very sad that this means the last of her blog installments. We have been enjoying them tremendously over the past few weeks. These blogs have given us all a fantastic insight into what it is like to be volunteering in Sri Lanka (quirks and all!) and helping to conserve the vulnerable wild elephant population. 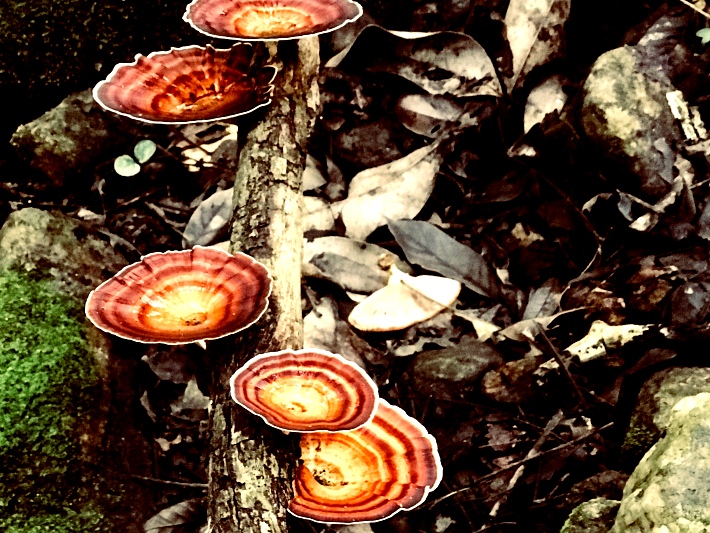 Tuesday morning dawned hot and humid and with a change of activity…. scat ( poo droppings to the layman) and ? marks on sand traps then resetting the traps. We drove – well, dodged potholes and lurched – to an area I hadn’t visited before, deep in the forest. There was a homestead at the starting point where they had puppies! So the beginning of the day was delayed somewhat whilst the pups got a good deal of fuss! We then set off at a smartish pace scrambling over rocks, streams and muddy sections making for the first sand trap. We were expecting to see sloth bear paw prints, leopard and rusty cat – we got one light footed porcupine and a trail of an ant path!

Resetting the sand pit was far more involved and persnickety than anticipated: first the old pit had to be carefully raked to remove leaves and other detritus; then dug over – not too deep, not too light but just right aka the Goldilocks standard of digging; raked over to smooth out lumpy bits and then raked again with the back of the rake to ensure a very smooth finish. Good training for icing a cake! Once done, we carefully stepped round the trap so as not to mar its perfect smoothness.

Eight traps later, we had added some deer to the tally – not even poo scats to find! So we reversed our journey – muddy sections, streams, rocks, scramble, PUPPIES! And made it back to the jeep having had an adventurous walk in the forest. 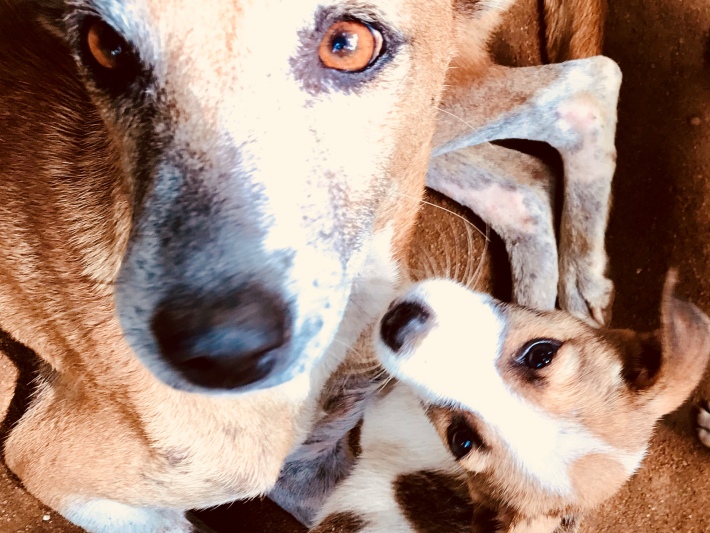 Wednesday – the start of Lent – brought an early start: bird spotting! Quite a few people have been converted in to ‘twitchers’ and get very over excited about seeing the exotic bird life on offer here in Sri Lanka. I can see why – there are so many jewel coloured specimens with long tails or hornbills. The peacocks are two a penny and are forever displaying their splendour and crying like mewling kittens (usually beside my bed, in the wee small hours).

We managed to spot quite a few new birds this time – we were nearer the forest so many more were twittering about. We returned in the afternoon to do the comparison but – such a shame! – it was raining quite heavily so the activity was aborted.

Thursday afternoon saw me preparing for my last teaching English class. We have been working on numbers 1-20 – listening, speaking, reading and writing them. I wanted to consolidate what we’d already done with a couple of games – but lack of paper, card, pens, scissors etc etc make it quite hard to construct enough for 15-20 children. Eventually I found an abandoned pad of large art paper and stole enough to construct 20 sets of numbers 1-20 – each number dotted out so that the children could trace over them correctly forming the numbers. Laborious indeed and makes you realise how much we rely on technology to quickly mass produce resources. 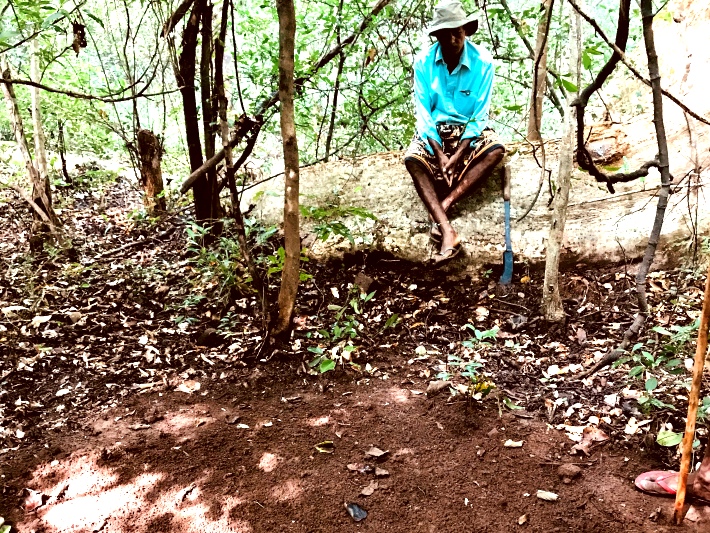 Whilst I was thus happily employed, the rest of the ‘team’ had gone out on the afternoon elephant hunt/observation. They came back buzzing! 38 elephants including babies!!!!! If I didn’t feel so noble, I’d have been spitting blood at missing seeing them.

But hey! Tomorrow (Friday) is my turn to visit Wasgamuwa National Park and everyone else who’d been had seen elephants galore! This safari is by way of saying ‘Thank you’ to the volunteers for their time and effort on the conservation project and I was expecting Big Things from my first ever safari in an Indian National Park. If we were fated to be the only group not to see any, there would definitely be some hissy fits happening! 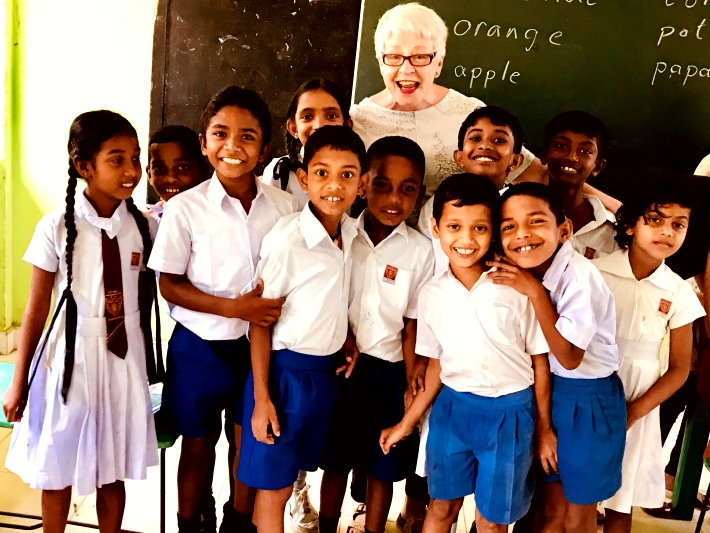 My best but sadly last day on the project!

Four of us went in to school today – myself and another ex teacher to teach and two others to observe/act as TAs. We were hoping that Grace from Holland might take over the class next week as we would both be gone – sob.

The lesson went really well – the children drew the numbers and there were enough of us there to pick up on correct letter formation. We had a mad few minutes when everyone needed their number squares cut out – I’d brought the only pair of scissors from the Field House, David had a teenytiny pair on his Swiss Army knife and one well off kid had a rusty pair in his pencil tin, so we snipped away like StruwwelPeter. Luckily most of the class legged it for an impromptu break so by the time they came back, we had them all done. The game involved turning the squares over, shuffling them about and then putting them in order. Then I yelled out a number and they had to hold it up. Many are still at the stage of having to count up from 1 in sequence until they arrive at the correct digit – only a few recognise the symbol independently of the sequence. Lots of follow up work needed! We finished with a counting backwards song and then it was time to say goodbye. They didn’t understand my impression of flying away on an aeroplane – just as well probably- so it was quite a cheery farewell with lots of high fives and selfies. 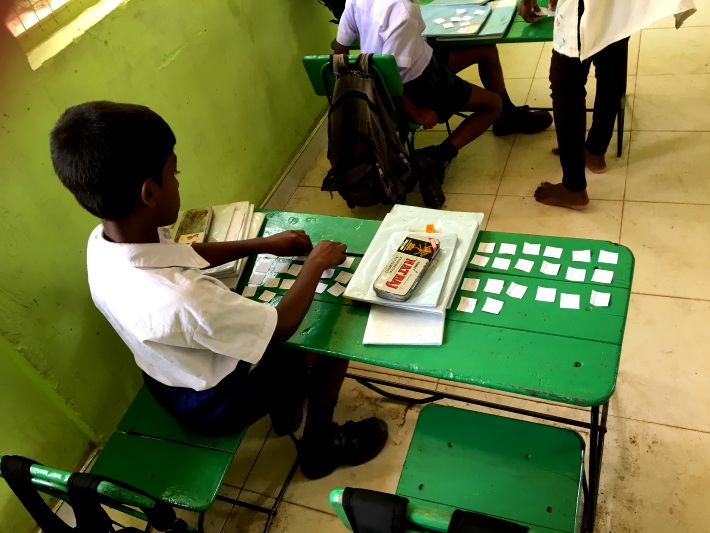 The next part of the day made it one of the best days ever! On a par to having dolphins swim next to me as we travelled up the east coast of Tasmania (after 3 weeks Conservation Volunteering in Hobart).

We got to the National Park at about 3.30pm – prime elephant spotting time as they like an early evening/ late afternoon forage. We drove through the park – very beautiful and lush, for about 40 minutes with a feeling of gloom descending on us like a grey fog. Not an elephant in sight! And no other creatures for that matter either. Surely we weren’t going to be the unlucky group who saw nothing? Zero? Nada?
We drove around a bit more and perked up as we spotted water buffalo in the distance. Four of them, obviously a family group with the Big Daddy looking back at us somewhat askance! Very definitely a negative vibe between us!

That was when we saw this:

I was really pleased that I’d organised my stuff and mostly packed because it was dark by the time we got back from Wasgamuwa. Perfectly timed for my last supper at the Field House too! Last lot of rice and curry though I suspect I’ve become a little bit addicted!