Week 2 in as a Galapagos volunteer

Week 2 sees us welcoming two young Dutch women to the Galapagos volunteer team. They are gap year students, travelling for 6 months largely alone, who found themselves booked in to the same tours and Spanish language classes in Quito and now here on the Galapagos volunteer conservation project. All the young people I’ve met are so mature and thoughtful with the concerns that exorcise me, close to their hearts too. It is great to hear them question so much, to listen carefully to each other and for political debate to rage in an atmosphere of wanting to hear everyone’s viewpoint. It has also been fantastic to share our different countries’ ways of working and to hear how each are tackling – or not! – the global climate crisis. If predictions about rising sea levels are correct, then this Galápagos island will disappear taking with it all our hard work trying to eradicate invasive species and our new, nearly organised, library!

We have returned to the Galapagos volunteer project in the Highlands to continue to dig out invasive plants and to complete planting native species. This area will become a centre for local people where they can learn about conservation, pollution and what they can do. There’s a huge amount of work needed for this dream to become a reality including making the site accessible. However, we were pleasantly surprised to see how much we’d done last week and managed to finish clearing one area and planting the rest of the small shrubs which are already growing well. Again, it was hard physically especially in the heat and humidity but an afternoon on the beach beckoned, making it all good!

This morning, we were back at the library continuing to classify books, put them on to the computer system, label them and get them on the shelves. You can really see it all coming together! Some of the volunteers are here for another couple of weeks and by the time they leave, I think it’ll be ready for it’s Grand Opening! It’s fantastic to know we have achieved this together and that it will – hopefully- become an integral part of this town’s life and culture. Mind, they really do need more colourful and interesting books so PLEASE look on your shelves and donate!

Well, that’s it for today! Off to practice my snorkelling. 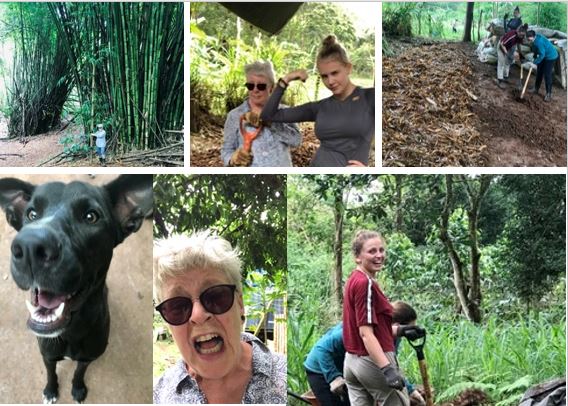 The end of the Galapagos volunteering week

Well, where on Earth did that time go??  Last day on the Galapagos volunteer project today for tomorrow we head off on our travels!

Today was really physically hard work and not for those averse to a strong whiff or two of chicken poo! We were at Daniel’s 100% Organic Farm again and the task set us was to make hot manure! Hot as in steaming -not sexy – at all! This manure is ‘Japanese’ manure – ie it’s a faster process that breaks down the components in to a usable mulch in 10 days rather than the months needed using traditional methods.  All we had to do was gather the various ingredients and layer them in to a manure sandwich.  This involved digging up very heavy soil and transporting it across the farmyard on a digger – Christian was VERY EXCITED to be driving the digger – where it was unloaded in to a heap.  We girls then had to spread it across an area spanning 4m2 – hot, claggy  work!

The next layer was the bamboo leaves we raked up last week – they had to be collected from the bamboo forest, loaded in to the wheel barrow – which held 3 bags a go – and then be wheeled back down a now muddy, slippery track.  Took about 12 bags to complete a layer!

The third layer was the lovely ripe chicken poo which contained an added dash of beetles, HUGE spiders and fire ants which, sensing tasty pale flesh, stormed my gum boots and, like soldiers of WWI, went over the top and down down down to my ankles, biting all the way.  The ensuing screams, mad splatting of the little blighters and hopping from foot to foot proved ineffectual in ridding my lower limbs of the beasts so I left the chicken poo pile to those immune to the ants or whose flesh lacked the required attraction.  This poo was then – you guessed it – spread across the 4m2.

Then a mixture of water, dried yeast and molasses is added and it’s this that causes the manure to heat up and break down.  The whole lot has to be turned twice a day for 10 days and then, hey presto, bagged up and it’s ready for use! Simples!

Guess next week’s volunteers might be repeating this exercise!

So, what’s this manure for?  Daniel is the only, absolutely 100% organic farmer on San Cristobal and has just expanded his farm land.  He’s now growing 100% organic coffee and It’s this 5 acre area on which  the manure is going to be used.  This is pretty important for the finances of the farm as he sells his coffee to a cafe/ bakery in Quito.  He’s quite laid back about the money side of things – basically, he and his small family are more concerned about being self sufficient and building a life based on the principles of need rather than greed.  Their house has a considered simpleness where everything is chosen for its use or for the children.  Very inspiring. 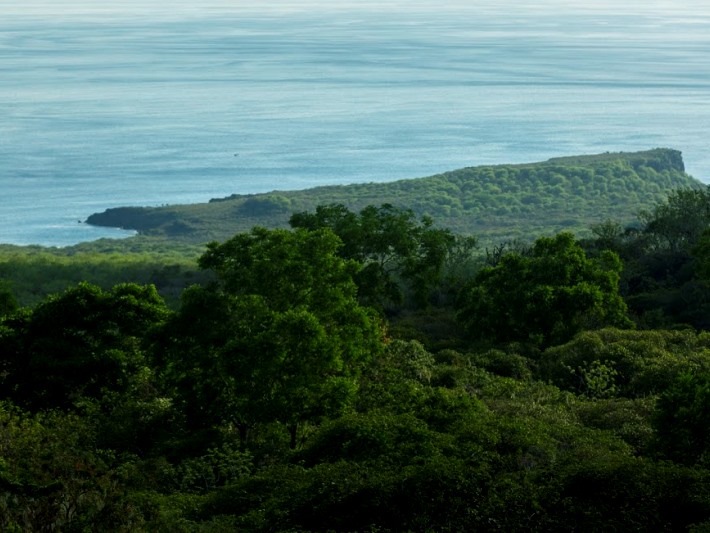