We were ready for more Galapagos volunteering at the Volunteer House by 8.30am for a hard day’s work. Hot and humid outside so it was a relief to know we’d be working inside today – helping to organise the new library ( the only library actually) in the town.  It’s in one room in what was a medical centre and the aim is to get youngsters reading more ( an aim very dear to my heart as an ex English teacher!) The task for today was to continue classifying the books which are going to form the basis of the library. These had been found in an old shed somewhere on the island and in my view, were  distinctly uninspiring! But if you have never had a library – and in my village at home we are fighting to keep our library open too! – any book is better than none! So I spent the morning happily classifying the books using the Galapagean version  of the Dewey Decimal system and jiggling the books around on the shelves to fit on all the new ones.

We really take for granted the colourful, fabulous picture books we have access to in the UK for pre schoolers and the rich well of literature available to us.  Here in San Cristobal, it is a reading desert.  Let’s hope our efforts and those of future volunteers brings the joy of reading to the island one book at a time.  Maybe if you’re reading this blog, you could send some of your old books this way? It would make a difference.

Many conservation programs support people who are working their little socks off trying to conserve something special so today we ventured out of the small coastal town of and went off through the Highlands ( cloud covered and damp) towards the north of the island. After half an hour’s drive on tarmac and then dirt roads, we ended up at 100%organic farm. It’s pretty huge – 23 hectares ( if you know what a hectare is you’re doing good!) and Is slowly clearing the land in order to grow organic veggies alongside the obligatory bananas, papayas, mangoes and oranges. The Galapagos Volunteering Project supports his endeavours and In turn reciprocates with helping building stuff.

The whole place was really cool with the house he and his wife, Miriam, have built sitting amidst the lush greenery. A number of families home school together using Montessori methods so an added delight was seeing a number of activities set out and little ankle biters happily playing in a totally relaxed child centred environment. So so different from the UK!

AND they had two super lovely friendly dogs who came along with us and a grey and pink cat who rubbed around our ankles in a very friendly manner! I am seriously minded to permanently volunteer here!

Anyway, on to today’s Galapagos volunteering job which was clearing bamboo leaves and putting them in to bags to create a lovely natural mulch for the organic veggies. The bamboo grove was a cathedral of green pipes stretching 30/40 feet above our heads, arching to create gothic windows of blue and green. Very special. So we were given rakes and a machete, bags for the leaves and set to it. It really was quite warm and humid and again, pretty sweaty and smelly work. But political discussion flowed – always fascinating and especially so with people so much younger and from different countries and backgrounds.

Then we went to the beach to watch seals surfing the waves, lolling on the edge of the shore and rubbing their itchy backs in the sand. Deep joy. 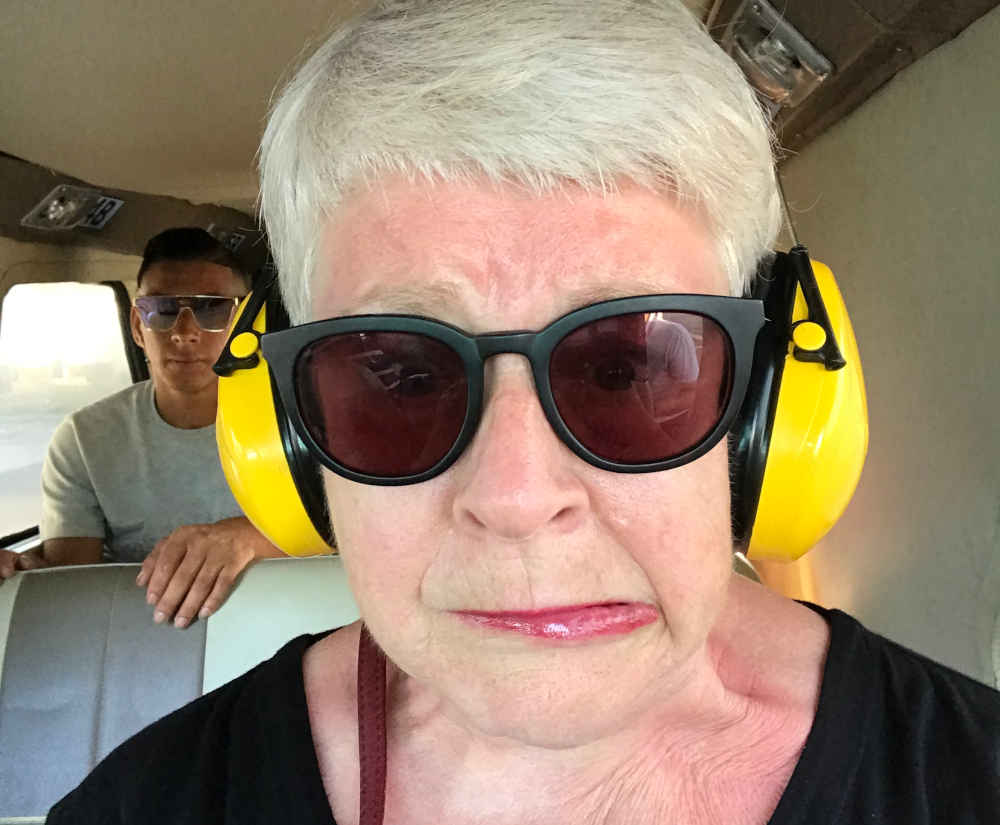 Well goodness me, I can’t believe that’s been my first weekend in the Galapagos and that I only arrived 8 days ago! So much has happened; so many new experiences and so many new people! What a whirlygig life can be!

Friday night saw us saying goodbye to 4 volunteers as they set off on the next part of their travels around South America. It was a great night – taking part in the local night life as Christian ( our co-ordinator for the Galapagos Volunteering Project) was joined by fellow Galápagos folk for a jam session with his band, an amazing violinist and two Spanish rappers. We discovered the best pina coladas on the island and felt very much part of the community as people we’d met during the course of the week drifted by, pausing for a friendly chat or joining the ever expanding group.

The next morning, three of us were up before dawn ready to catch the plane to a nearby island – Isabela. It’s a completely different island being inhabited by only 1000 people!

The plane was the smallest I’ve ever been in – ten people including the pilot! It did feel remarkably flimsy and I must admit to feeling somewhat worried when the pilot attached his phone with GPS on to the control panel! We donned headsets to cut out the racket of the engines and after they’d wound it up, the plane took off and seamlessly juddered its way across the Pacific Ocean. It was an incredibly short flight – only 45 minutes – so we didn’t get very high which was great as we could see every island and rock we passed over and the glistening white tips of waves as they roiled over underwater reefs. I kept a sharp eye peeled for schools of dolphins and pods of whales but didn’t spot any.

We’d booked a tour of ‘The Tunnels’ so after dumping our bags, we made our way, hungrily, to the Galapagos Surf and Bike centre. Here we were given snorkelling masks( ‘breathe in through the nose and if the mask suctions on to your face, you’re good to go!’) flippers and then – quelle‘orreur! – a wet suit!! I’ve giggled watching people trying to get in to these garments of torture so no doubt the gods were rolling in the aisles as I squeezed, coerced and generally forced my not that large! Body in to a suit designed for an anorexic 10 year old! And then after that indignity, we had to get the thing off again! I’d like to say I kept my cool and that various graphic expletives did not rend the air – but I’m a truthful writer….

Anyway! Onward!! To the next embarrassment- actually snorkelling with other people watching!

We bundled in to a smallish boat and took off at lightning speed thudding across the waves – up up up and WHACK! Down on the next wave. I’d imagined a lovely glass of Prosecco as we glided across a millpond spotting the aforementioned schools and pods. Not quite bitter disappointment but close! However, it was worth all the horror as we finally – after 45 minutes of holding my stomach together- arrived at ‘The Tunnels’. This is an area of volcanic stone which has been eroded over millennium, creating arches, bridges and pinnacles forming a sheltered bay of turquoise water. This is home to a wide variety of aquatic life AND blue footed boobies!!

As we picked our way carefully over the jagged lumps of black volcanic cinder and pumice, we spotted a baby booby waiting patiently to be fed and for its feet to turn blue! Apparently a surfeit of sardine is needed for this miracle to happen though I can’t see why a diet of sardines should do the trick! Presumably red footed boobies eat some other foodstuff which creates the different magical effect. This one was very patient and didn’t mind us getting pretty close to take a photo. It is too fat to fly at the moment!

Then we spotted turtles – at least five of them – swimming majestically through the clear waters, popping up to cast a wise eye on us and take a deep breath ready to glide gracefully with a leisurely flap of a flipper, through the shallows. They were whoppers and our guide thought they were probably in their seventies!! They can live up to 150 Years. They start breeding at about 30 ( very wise!) and can produce eggs until they are 90 years old! Who knew!

It was a stunningly beautiful if somewhat surreal landscape unlike anywhere else I’ve ever seen. The colours were intense, blue, turquoise, aqua against the jet black shiny rocks scattered with candlestick cactii some 3/4 metres tall ( they grow 1cm a year! Do the maths!) some with gaudy yellow flowers, others dusty and skeletal. Stunningly gorgeous.

Repeat performance of getting in to the wet suit though with the added bonus of interested bystanders and then it was time to take the plunge! Everyone else leapt off the side of the boat like giddy kippers whilst I teetered on the edge. It’s a long way down in to the water! I’d decided to have a semi inflated flotation jacket to add an extra dollop of attractiveness to my outfit and to help overcome my very real fear of drowning plus I had a life belt to cling on to……..I’m a belt and braces girl! After much encouragement which sounded like pleading, I lowered myself in to the water – cold! Cold! – grasped the life belt and was gently towed along by the very kind guide. Thankfully there is no photographic evidence though I’m sure a satellite image might make its way on to the front page of the Daily Mail with a ‘Nessy sighted’ headline. Anyway, dear reader, you will be relieved to hear that I mastered the breathing, didn’t gag and saw beautiful fish! I was oblivious to the fact that the kind guide had abandoned me at least 30 metres from the boat and only panicked when I surfaced and became aware of it and then got the very salty water in my eyes! I made stately progress – on my own! – back to the boat and decided that was enough for my second attempt. I shall give it another go and master it ….. tomorrow.
Or maybe the day after!