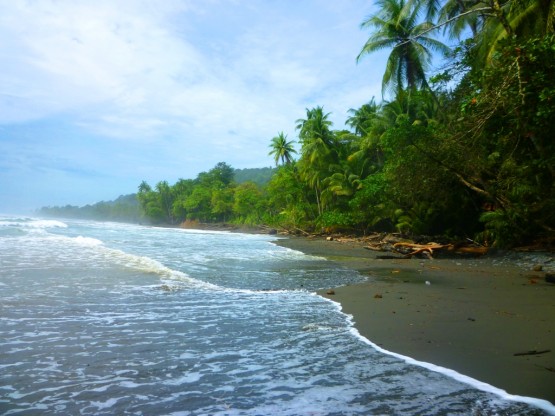 The bus journey to San José was an experience. It left at around 3am, which in theory sounded perfect, as I reckoned on sleeping all the way to the capital, arriving at around 9am. For some bizarre reason, even after a month of living in the Costa Rican wilderness and writing often about the bumpy, flooded roads, it did not even cross my mind that the bus journey would be too rough to be able to sleep. As a consequence I arrived in San José shattered beyond all belief, yet adamant to explore the city. I love to make the contrast between life in the countryside and that of the capital city in whichever country I go to, and despite San José’s notorious reputation as an ugly, dangerous city, Costa Rica was to be no exception.

What I saw was neither ugly nor dangerous. True, I did feel massively in the minority as a blonde female alone in the centre, and received a lot of looks from people in the street, but I felt no threat there, just interest. The centre was like any shopping street anywhere in the world. There were few impressive buildings or parks like in all other capitals that I have been to. In all honesty it was quite nice to be in such a big city and not feel that there was so much to do and too little time to do it in, so I enjoyed a few hours of wandering round and making the most of facilities that I had not encountered for the past month. I say this with shame, but I was so glad to have KFC as a change from rice and beans.

I was to fly early the next day. The flight was incredible. The plane was a 15 seater and seemed to barely rise much above the mountain tops. There were stunning views over the rainforests, lakes, mountains, the coastline and fishing industries. It was a great way to see the country. The drive from the airport was interesting too- the countryside seems to differ here. There are fewer mountains, more rise and falls. The land seems to be farmed more, and even the plants seem different- I don’t know why, but there just seems to be a lot more colour down here. 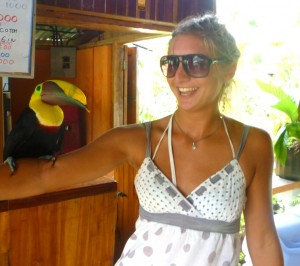 Upon arrival in the tropical beach location I was exhausted. We were served breakfast in the soda next door to the project accommodation and I had a quick tour of the house, the village and the hatchery before pretty much sleeping non-stop until the next day. First impressions were good though. This place has the reputation for being the most beautiful project site, and there is no lie to this claim. The beach is long- about 4km- and lined with incredibly tall brightly leafed palm trees. I cannot describe it, but the vegetation just seems brighter here. Maybe it was because of the stormy sky, the black sand beach and the angry grey sea. The village borders the beach, and backs onto a mountain with many paths and trails into the denseness of its rainforest. There is forest all around the house and the village, and with that comes the wildlife. Over breakfast we watched toucans in the tree outside the soda, after lunch we saw white faced monkeys in the garden. Seeing the monkeys was incredible. The owner of the soda put out bananas for them, and they leaped from tree to tree before scampering down to pick up the bounty. Once arrived at the banana slices, they would ram about four or five pieces in their mouths, arm themselves with one piece per hand, and then try to shove one more piece into the mouths before darting off up the closest tree. I even saw a mother with her baby on her back; it was so tiny.

The project house is lovely. The downstairs is open, with a large dining table, a kitchen, toilet and shower. Upstairs are three bedrooms, a balcony and another toilet. It is large, with plenty of space to socialise and chill out. There are seven of us here at the moment, originating from Costa Rica, France, Spain, the States and the UK. After chatting with the people here about the opportunities- hiking in the mountains, horse riding along the beach and into the rainforests, great surfing, volleyball and walking along the beach to an indigenous camp, I was keen to let my final project get underway.

Follow this link to find out more about volunteering with turtles in Costa Rica.