Learning to surf at a tropical Costa Rican beach 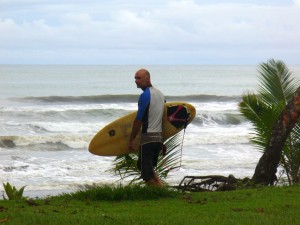 Watching the local surfers this morning from the hatchery, I was gripped with a rush of adrenaline tinged with fear. I really wanted to give surfing a go again, in a place that is meant to offer the best surf in the area, but to be honest, the waves were massive. Huge. When the group of lads came in about an hour later, we started chatting to them, wondering when the waves would become a good size. They laughed at us, saying if anything they were too small to surf on, despite the fact that I was looking at them and it was perfectly obvious that they were enormous.

Amongst their jeers and words of encouragement, two of us took up our rental boards and marched out confidently into the sea. We had decided to do away with the lessons, as we had both got the very basic basics of surfing. Two of the local boys came out with us to give us some tips, while what seemed to be the rest of the village gathered on the beach to watch the foreigners flap around desperately in the water.

Now, I know the saying that a bad workman always blames his tools, but I remain convinced that how appalling I was had nothing to do with me, but with the size of the board, the amount of waves, the colossal size of the waves, the fact that it was raining, the fact that it was sunny, that I was probably too tall for surfing, that I had bad knees. None of this seemed to wash on anyone else though, which I maintain is spectacularly unfair. The main thing was that I had so much fun. We spent ages out in the sea, desperately trying to paddle through the waves to reach the perfect wave (whatever that might look like) further out at sea. This in itself was tiring, and after what seemed an eternity of paddling I was slightly upset to find that I had only gone as far as chest deep. Now, I know I keep banging on about it, but the waves really were massive. There is something extremely counter intuitive about getting on a small piece of plastic and paddling into the massive swell of waves that knocks you off your board with such force that you don’t know if you’re upside down or the right way up, before starting off again, waiting for an even huger wave, before attempting to stand upon said piece of plastic in the middle of the roaring swell. I mean, this is just against all survival instincts. I guess that is what gives you the huge adrenaline rush though, and kept me entertained until my body could take it no more and we took a lunch break. 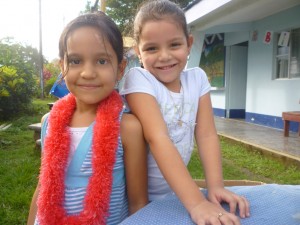 After lunch I went to school and played bingo. Now this might sound slightly odd, and I guess it is. There is a library in the village, run by an American lady with the help of local women. Twice a week they open up to all the children to help them with reading, get them in touch with computer aided learning and to teach them English. I went there with the other volunteers to help out. Now, I really am not a children person, so I volunteered to tape up a load of books that were falling apart, safe in the knowledge that I would not have to deal with any scary children. This plan seemed to backfire however, and soon I was surrounded by a crowd of about six children who apparently thought that what I was doing was far more interesting than what they were doing. Before I knew what was happening all these hands were desperate to help, and strips of selotape were being cut left right and centre, pages stuck together haphazardly, and general disorder was reigning. Realising that this probably wasn’t productive, I gave them each a job, and spent two hours cutting and sticking, and teaching them how to count in English. At the end of it, I was shocked to admit that I had actually really enjoyed myself- probably the first for me where children are involved.

In the afternoon, the boys that we had surfed with invited us to take part in a volleyball tournament. We gathered together a turtles team, and hit the volleyball pitch. Two of us out of four had never even set foot on a volleyball pitch before, but somehow we won the first five games in a row. It was so much fun, even in the torrential rain that persisted throughout, soaking me to the bone.