The final days at the paradise beach placement 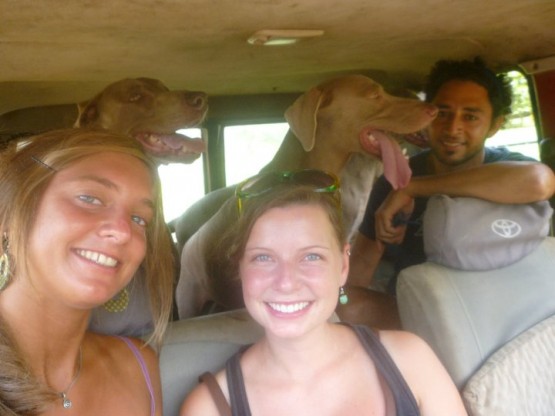 Tomorrow I am leaving this beach, and I must admit that I am going to be sad to go. I have had such an amazing time here, keeping very busy with the project but also with all of the incredible opportunities available around here.

Two days ago I hopped into the battered, sticker-covered land rover of the owner of the local restaurant, Rossy, along with his five (very large) dogs and two other volunteers. He drove us 30 minutes inland, to where he owns a huge expanse of rainforest and farmland in the hills. The drive was stunning, through the mountains and lush greenery, along roads destroyed by the rains. Each person that we passed on the road, whether on foot or moving vehicle, would wave enthusiastically at us as we passed. 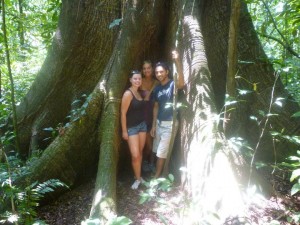 We pulled up in a field entrance on the edge of his property, and set off on a short hike through his rainforests, stopping often as he explained some of the plants and trees of interest. We stood amongst the roots of a tree that was over one hundred feet tall, marvelled at an ants’ nest the size of four double beds and learned of the symbiotic relationship between some of the trees and creepers. We started heading steeply uphill next to a gurgling brook, which eventually lead up to a crashing waterfall. At the top of the waterfall, whilst the dogs were splashing around happily, Rossy announced that we were getting in. Feeling bemused we all got into our bathing clothes, wondering where on earth he was anticipating that we bathe in the middle of a roaring waterfall. He headed over to the top of the waterfall, sat down and suddenly disappeared. Gasping with surprise, we all hurried over to the edge, where we saw Rossy casually swimming in a small lagoon maybe 5 metres below us. He had simply sat down in the flow of the water, which in its force had created a natural slide with a deep pool at the bottom. We spent a good hour capering around like children, leaping from the cliff sides into the water, bathing in the whirlpool below and trying to find the most daring way to slide down into its depths. It was a really magical place, with ferns dangling over the steep sides of the gorge, the trees growing high above us and the butterflies fluttering through the dappled sunshine. 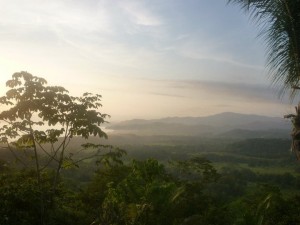 In the afternoon we spent a very pleasant time at the house of some Americans called Hank and Marie, who have been living down in Costa Rica for a few years after giving up their life in the States. We had met them a few days earlier whilst having dinner at the restaurant, and they invited up to their mountainside home to thank us for looking after the turtles. I have never seen such a spread of excellent food for so few people- they had gone to such great lengths to entertain us, purely because they believed in our cause out here. We spent four or five hours eating, drinking and swimming in their outdoor pool, which had a view over the sea and the setting sun. I couldn’t work out which was more impressive- their act of generosity or the location of their property.

This morning we were collected from our project house by an expat American on a quad bike, called Butterfly Mike. Butterfly Mike is a friend of Wild Bill and, as his name would suggest, has a keen interest in butterflies. In fact, his interest is so keen that he owns the only outdoor butterfly farm in Costa Rica. Over the past six years he has been growing many flowers natural to the country, which all together attract over 160 different species of butterfly. And he knows his stuff- as we clung to the back of the quad bike rattling along the battered roads to his farm, he regaled us with stories and anecdotes of his time here and of the incredible species he has encountered here. The farm itself was lovely- a very colourful garden on the side of a hill, with a natural rainforest at the foot, where we wandered through as he explained all of the incredible things that we were seeing. At the end of the tour, we tasted some of the honey made by his bees, and I would not be lying to say that it was the most delicious honey I have ever tasted.

I’m not sure how the rustic beach I am heading to next could possibly better my time here.