A day in the life of working with turtles 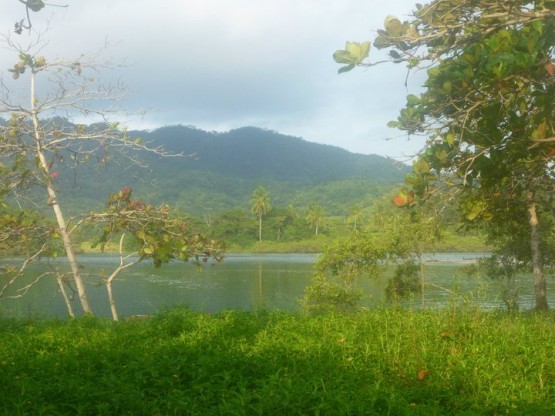 Anne’s account of life at the Paradise Beach Placement continues:

This morning I woke up and realised that something very strange was going on. It was very quiet. An intensely bright light was entering into my room through the gaps in the shutters. Something in the back of my mind was telling me that I should recognise what was going on here, but I could not make a connection. Getting out of bed I gingerly opened the shutters, to discover a beautiful sunny day. Not a cloud in the sky, and the ghostly silence created by the lack of hammering rain crashing down on the corrugated roof. It felt like a miracle, and I immediately went outside, determined to make the most of the day, convinced that the rains would be back as soon as I could utter the words “sun screen.”

After collecting some coconuts and drinking their juice with ice, swimming in the deliciously warm sea and reading for a bit in the sun, I headed to the hatchery to check on baby turtles. There were 270 little ones, all desperate to get out to the sea. Just as I was releasing them I met a teaching assistant from the local school walking along the beach. She was from the States, and told me how she had been teaching the children about turtles, and how you should not poach the eggs. Last week a child had come into school with a cake- when she asked him what it was made from, he had said turtle eggs. She now wants to bring the children down to the beach to watch us releasing turtles, just to try to ring home to them that these endangered baby creatures are actually what are being used illegally to make such cakes.

Things all seem to be pretty eventful on the turtle front at the moment. Last night we filled up the hatchery to its capacity, and had to bury some of the nests on the edge of the beach, hoping beyond all hope that the eggs would be okay. Just as we were worrying what we would do with other eggs that we would collect before the next holes were to become empty, we saw one of the local dogs slinking past us, something hanging from his mouth – something that looked suspiciously like a baby turtle. Hurrying over to the hatchery, we discovered shells strewn over the sand and four gaping holes where there had not been holes before. We also discovered a large gap under the fence and two sets of paw prints all over the hatchery. Over one hundred baby turtles, which were just about to hatch, were consumed by those two dogs. Of the eggs in the nest that they had not eaten, the turtles had started hatching, sensing other eggs in the nest opening up. The heartbreaking thing was, despite the fact that they were hatching, they were not fully formed. Turtles all tend to take the same amount of time to develop- when the first one develops signals are sent out to other eggs, and they start to hatch too. So what happened here was that the baby turtles were hatching without a fully formed food sack, without which they will never have enough energy to make it out to sea and to a food supply. Technically speaking, we lost 400 turtles to those dogs. They are now banned from the property, tied up at home howling. 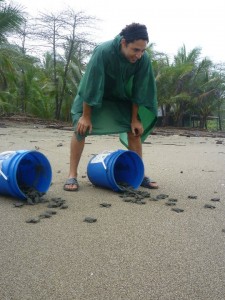 On the up side, (but which still doesn’t really make up for that loss), last night we met the stupidest poacher I have ever encountered (not that I really encounter that many, but this guy surpassed all levels of stupidity that I have ever witnessed.) Whilst patrolling we found the tracks of a turtle, and followed them up the beach to the nesting turtle. As we were collecting the freshly hatched eggs from beneath her, a poacher approached us and watched us. We chatted to him for a bit about our work and how many eggs this certain turtle had just laid. Once we had finished, we said goodnight and continued along the beach. Once we reached the end of the beach we turned around again and headed back towards the hatchery to bury our newly acquired eggs. As we passed over the turtle tracks we saw a light where we had just been. Standing in amazement, we watched as the very same poacher poked around the area, apparently looking for the nest. Since he had watched us putting the eggs in the bag, we were very confused and left him to it. Passing by that spot again an hour later we went to see if he actually had been stupid enough to be looking for the eggs- and lo and behold, we found five holes and stick marks where he had been poking the sand looking for the nest.

To find out more about Anne’s volunteering adventure, check out our turtle conservation volunteer project.