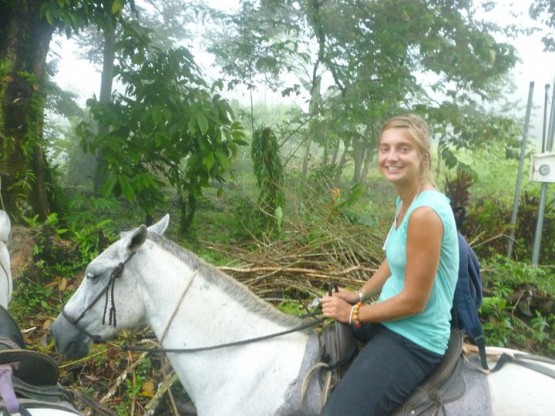 To say that I was out of control would be an understatement. I was completely and utterly extremely dangerously out of control. And to cap it off, I had purposefully placed myself in this situation. As you will know from reading this, all worked out okay in the end, but for a moment there I was convinced that my body would be trampled by the crushing hooves of the cantering horse.

Now, I cannot stand horses. I loathe and despise and fear them greatly, but as ever, keen to do new things, when I saw a sign advertising horse riding in the mountains and along the beach, I was keen. So I organised for four of us to spend the afternoon on horseback, exploring the mountains behind the house before heading off for a canter on the beach. All went pretty well at first. I managed to get on my horse, and spent the first part of the ride chatting to it in my finest Spanglish, in an attempt to show ease and dominance. In reality, I had no idea what I was doing, and was completely in the horse’s hands. Luckily for me, said horse seemed to know what he was doing, and followed the leader dutifully, stopping only occasionally for some food, or merely out of pure stubbornness.

We rode along the beach front to the end of the village, where the track continues steeply upwards for about thirty minutes before reaching a small village. The ride up was interesting, and we saw sleeping sloths in a tree, and another one chomping away on vegetation further up. We passed a yoga farm, run by a Canadian and set in beautiful isolated grounds. We went so high that we were up in the clouds, and when we arrived at the village, everything was shrouded in a mysterious mist. It felt like we were arriving in a deserted village, as everything was silent as the grave and not a soul was to be seen. We attempted to continue along the path, but it was in a really bad state after all the rains, and the sky was getting darker and more threatening, so we decided to turn back to the beach. The views going down over the bay were stunning, and rays of sunshine were squeezing their way through the storm clouds. At the bottom we started out along the beach until the rain, which until this point had been steady but nothing unusual, started pelting down, with the addition of thunder and lightning. It would be not the slightest exaggeration to say that in one moment I understood where the name lightning bolt stems from. It was though a bolt of yellow flames erupted in front of me, and the horse reared up on its hind legs in fear. At that point we decided not to risk continuing, and headed the horses towards home.

Riding along the beach was great- just as great as you would imagine it to be. The horses loved it, probably as it was so much kinder on the hooves than the road, and in celebration they all broke out into a trot. It was great, so much more fun than plodding along the road. Given how much we were enjoying it, the horses were coaxed into a gallop. That was where the out of control issue came in. All the while I had not really known what was going on, but now I was completely at the horse’s mercy. And it went for it. From the back, it overtook its three companions, and steamed on ahead. I completely left my saddle, bobbing around like an apple on the rough sea. The horse seemed to dance over the debris littering the beach, until it came to a fallen tree that was spread over the whole beach. Approaching it I started pleading with the horse, “Please don’t jump the tree, please don’t jump the tree,” completely forgetting to use the reins. Obviously it completely ignored my desperate pleas, and hurdled the tree with much gusto. At this point reason kicked in over my desire to just throw myself off of the animal, and I pulled tight at the reins, causing it to rear up again, and me to slide off the back of it into the sand. On reflection, it was completely exhilarating, and I loved every second of that out of control feeling, but I was sure glad when it was over.

I do think I will be sticking to walking in future though.