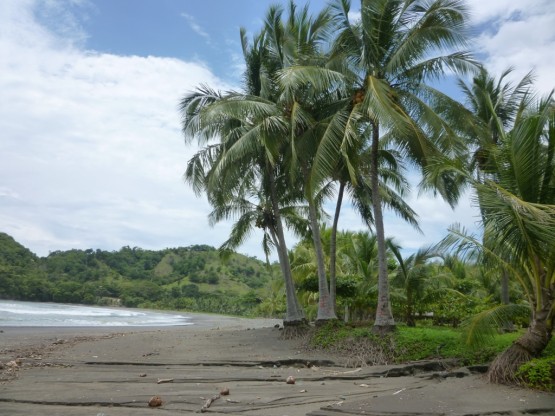 Recently returned from our brand new project in Costa Rica, Anne tells us all about living and volunteering on the Pacific Coast of Costa Rica in several installments spanning all the project sites.

This is the first installment, based at our Community Project, Costa Rica.

Leaving Europe for the first time, I packed my bags with no expectations and no idea what was awaiting me in Costa Rica. With five weeks ahead of me in a tropical foreign climate, it did not seem real that I would finally be crossing across the Atlantic rather than just paddling in it on holiday.
Landing in San José in the rain at the dead of night, I made sure I was wrapped up warm in my new Gore-Tex raincoat; error. On leaving the airport I was sweltering, and immediately accosted by a hoard of very keen Costa Rican taxi drivers, all very keen to escort me on to my hotel. These were my first impressions of Costa Rica. My following impressions were viewed from the comfort of the hotel taxi; that of the rubbish lining the streets, the police raiding a bar, the prostitutes dotting most corners and the squat little houses. However, upon waking the next day and taking the rickety bus out in to the back of beyond, I realised that my welcome to Costa Rica was not at all an accurate depiction of what the country has to offer.
Six hours on a bus to my project site certainly opened my eyes to this fact. We initially sped out of San José on a modern motorway, with rainforests, mountains and my first ever view of the Pacific Ocean flitting past. And then came the change- the bus headed on to pothole-ridden stony tracks, driving through rivers, skirting massive holes where the torrential rains had washed away segments of the road, all the while heading through lush green trees and pastures, with grassy plains leading into tree-covered mountains shrouded in mist. Peculiar cows stared back at me through the windows, apparently just as interested in a blonde westerner as I was in these strange creatures that looked like a bizarre cross between a cow, a goat and a camel. Exotic bright flowers and plants dashed additional colour to the rich blanket of greens. I stared open mouthed through the window for the whole six hours. It felt like I had hopped on a bus and was trundling through the set for Lost.
Upon arrival I was immediately embraced by the overwhelming warmth of the community and the other volunteers and assistants. Eating my lunch prepared by my hosts with the other volunteer staying here, a Spaniard from Madrid named Emiliano, and accompanied by the host family, I was welcomed into their family. Despite the obvious language barrier and my lack of knowledge of most turtle-related vocabulary and all flora and fauna vocabulary, they were all keen to prepare me for what to expect, and how I could make the most of my ten days here.
After lunch I took a short siesta- which ended up lasting for six hours. When I woke up it was dinner time, and I had time to ask Sandra, a project co-ordinator, all about the project and my role in it. I learned that I would be doing my first patrol that very night, from 21.00 until 01.00. I was excited, again with no idea what to expect. 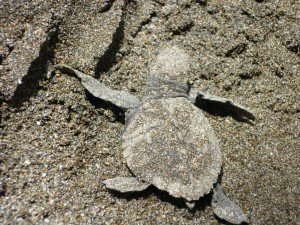 Walking along the beach in the dark, lit up only occasionally when the moon managed to squeeze some light through a gap in the clouds, I was terrified of treading on a turtle, or kicking one halfway across the beach. I had been told that although the beach was only a small one, only 800m in length, it has a great number of turtles visiting it most nights. Emiliano told me that he saw fifty turtles in one four hour patrol session. Apparently the local community is awaiting a phenomenon here, known in Spanish as an “arribada”. A few years ago the locals contacted the organisation because one night over one thousand turtles arrived to lay their eggs in just a space of a few hours- this phenomenon only happens in five or six locations around the world, Sandra had explained to me. Part of the important work here is to study this phenomenon, and to monitor it. The ever increasing number of turtles per night is leaning towards this happening again within the next few months.
Seeing my first ever turtle was incredible. Walking along the beach in the dark my eyes gradually became accustomed, and suddenly I saw a large shape in front of me, roughly 80cm long, and moving. Approaching the shape, I saw a turtle dragging itself up the beach until it was sufficiently far from the sea, before using its back legs to dig a hole, contorting them to make a spade-like shape with which it could scoop the sand. When the hole was sufficiently deep I watched in wonder as 93 perfectly round white eggs were deposited into the hole. Once finished, the legs were used again to cover up her future offspring, before she turned on her tail and shuffled back towards the sea. Watching her slide off into the waves, shimmering in the moonlight, was a magical experience.
At 1am I sank into my bed, tired, but full of anticipation for what the next few days had to offer me.