How does it feel to volunteer with bears – by Rosie Dutton

Learn all about what it’s like to volunteer with bears in Romania through Rosie Dutton’s fantastic updates. We are now half way through her trip in Romania, and time is flying by.

Today was my first day with the new volunteers and it was very nice.  Hannah and Jon are both very passionate about bears like me and it’s so nice to talk about and get excited about it together.  As it was their first proper night myself and Miriam took them for a little tour around the town just so they go their bearings.  We went to the Irish pub ‘Deans’ and really got to know each other over a couple of drinks.  After that we were pretty lively so I introduced them to the ‘Times’ club.  It was such a good atmosphere and had all the songs we knew so we stayed there and danced for a few hours before come home to bed.

Today was my first sleep in since getting to Romania, and it was well needed!  We had told Hannah and Jon about the paragliding we did and we must have sold it to them pretty well as they ended up doing that today!  While they were doing that I wandered around the town and got a couple of images and came back to the flat.  When the other two were home, myself and Hannah went shopping and Hannah bought a traditional Romanian style top which is what I had bought last week… They are very cool!  We came home and chilled out for the rest of the evening, I am hoping to photograph some starts tonight from our back garden which could look very cool! 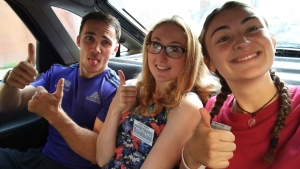 Today was our first day with the new volunteers.  It was really cool being able to show them the ropes and see the excitement on their faces when they saw the bears in the trees and the wolves right up close.  Today we were on meat, and they were thrown in the at the deep end, they thought the smell was foul but I assured them that it wouldn’t be long until they are used to it.  The amazing thing that happened today was meeting Christina Lapis properly.  She was here with some other people showing them around the sanctuary and we had a good conversation about the work being done here.  She was so grateful for us being there which honestly felt amazing, but for us we were the ones who were grateful to her for doing what she has done.  I am so inspired and in awe of her, her work and her beliefs that I had butterflies when we were speaking, it was just like meeting a celebrity.

Later on the heavens opened and we had yet another thunder storm which brought the temperature right down however we were fine working hard in the food prep room.  All in all, today was a great day!  I plan to photograph the stars in the garden this evening so fingers crossed the weather stays dry! 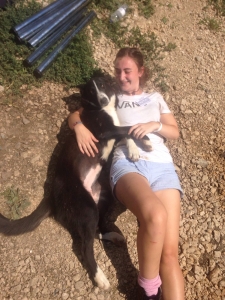 Today was dairy!  We had a bit of a wait before we could start any food prep today because there were no containers for the food to go in.  While we were waiting however we took full advantage of free time and cuddled all the dogs and the goats! And watched the bears in the trees.  Once the containers arrived we all worked outside which was a lot better than being inside on such a nice day.  The guys at the sanctuary as so kind and thoughtful they had noticed we were outside yesterday and when we had arrived there was mounds of food prep just waiting to be done outside.
After lunch which we decided to eat outside because of the beautiful weather, we went back and helped out with fruit and veg.  We had a real laugh with the guys and we had a competition to see who could peel the corn the fastest.  I then took a bunch on bananas out to give to the goats because we have recently discovered that they love this!  We then came home and relaxed and showered.  I think today I have come back the smelliest due to Hannah (another volunteer) stabbing a yogurt and it spraying all over my face and clothes, but it’s all good fun!  Tonight we are planning what we are doing for mine, Jon’s and Miriam’s last weekend, chilling out and having a movie night!

Dairy and meat today!  Today was quite quiet with not a lot of food so in between filling crates we would photograph the bears that were coming very close!  It truly breaks my heart knowing that these bears have had such a difficult start to their lives.  Today and yesterday I have had two encounters where I have sat for around half an hour looking right into the bears eyes. I was so close that the bears are breathing on my face. Sitting and watching one of the female bears yesterday where she sat then laid down right in front of me was an experience I will never forget. The bears have so much land to roam around but this individual chose to stay there when I sat in front of her. She had experienced abuse beyond imagine and suffered in the years before she arrived at the sanctuary all at the hands of humans. Despite this the bear seemed to accept me and just look at me. I felt ashamed that a fellow human could be so cruel. Today the two younger bears near the food prep room sat and watched us peacefully while we were working. These two were brought here from Armenia and were kept in terrible conditions in a zoo. They will never grow bigger because of this. Despite this, they sniffed us and stayed with us for about an hour before running around to play.  Each day I get to know the bears a little bit more, the more rewarding the work is.  I know I’m contributing to the happiness of their lives and it actually feels amazing!  Tomorrow is going to watch the feeding again which I’m really looking forward to!  It’s so great! 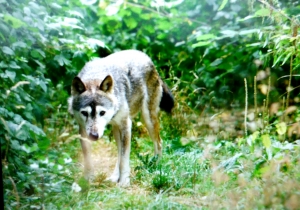 Today was another great day at the sanctuary, but the most tiring by far.  We went around to watch the feeding, this was my second time watching the feeding and the first time for Hannah and Jon.  Because there were four of us however, we had to walk around the enclosure behind the truck… The sanctuary has some very very steep inclines!  We did this all morning and then went back to food prep where we did some meat and veg.  A lot of the time I was trying to take the baby goat back to its mother because it kept running up to us and playing with us which is very cool!

Tonight we are going out for a meal, introducing the newbies to a traditional Romanian restaurant so we will see how that goes.  This weekend has forecast very heavy thunderstorms so we are probably going to check out the shopping centre on one of the days and I’m not sure what we will do on the other.

I can’t believe that this is my last weekend in Romania and it is starting to hit home now that I am only with these bears for another 4 more days before I head back to GB!
To find out more about our volunteer with bears project in Romania, check out our bear sanctuary website. 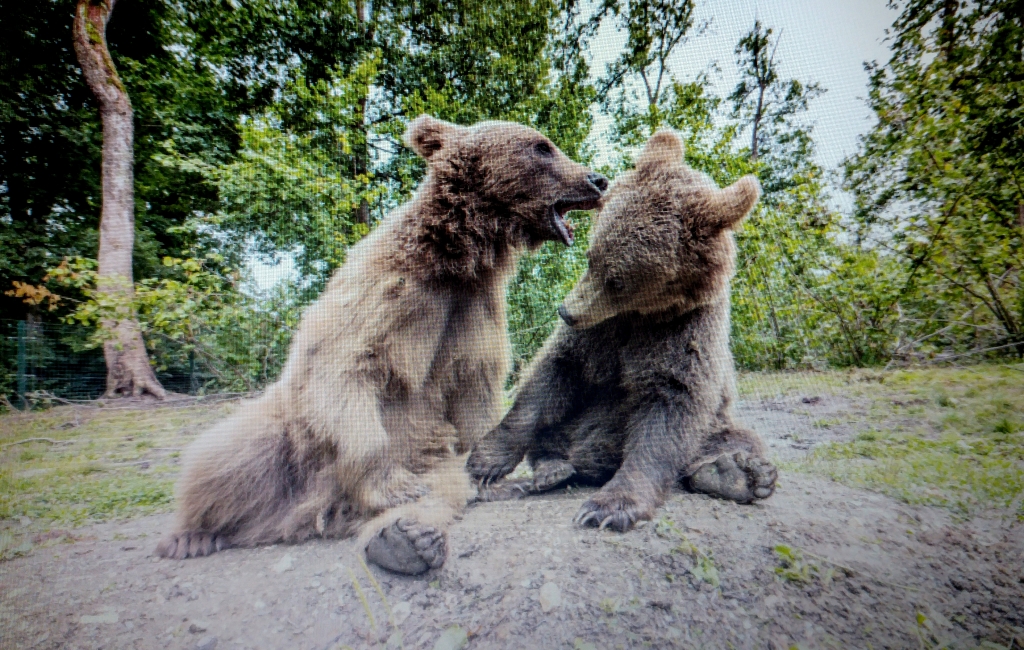