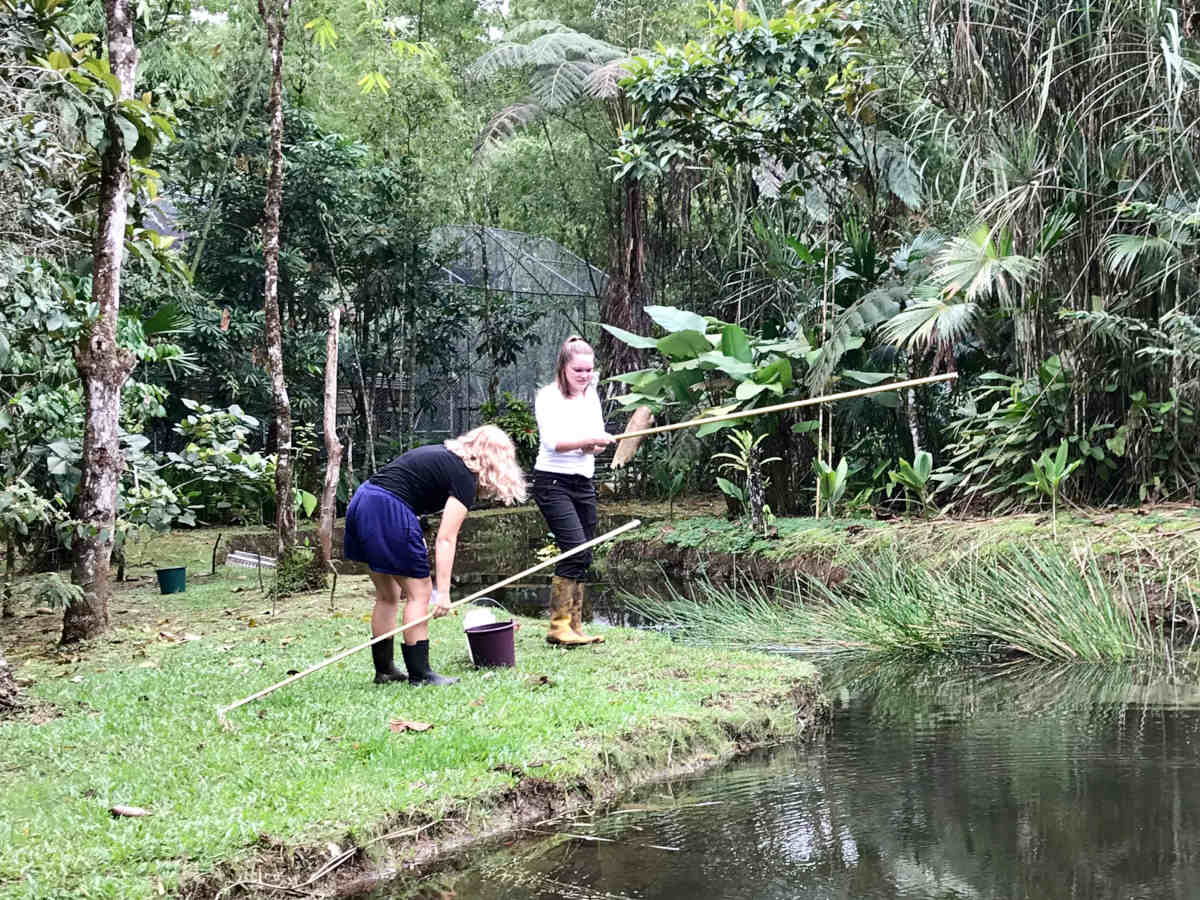 Volunteers at the Ecuador wildlife sanctuary: there are 20 here at the moment, mainly either on gap years or taking a break from their jobs or travelling before settling. Did I mention that I met a couple in Quito who had sold everything, saved for four years and were travelling from Alaska to the southern most tip of Argentina in a modified van with their gorgeous woof? They’d been on the road for a year thus far and were planning on taking another year to complete the dream….Now that’s an adventure!

Anyway, we volunteers at the Ecuador wildlife sanctuary sleep in chalets of up to six people scattered throughout the site. Beautiful pathways through exotic flowers and little bridges crossing gurgling streams lead to the toilet and shower block ( bring your own toilet paper please) Which is all very well in bright sunlight but a little less attractive in your jammies and wellies by the light of your cell phone. But a lovely hot shower whilst the rain beats down on the tin roof at the end of a hot sticky day – bliss.

Today I was in the ‘mammals’ team – this excludes monkeys! And it was also ‘Enrichment Day’ so pretty busy! The morning was spent firstly preparing specific diets for the 5 different mammal groups, then doing the rounds. First off – cleaning out the old food and poop from the feeding traps after ensuring the animal was not in there with you. As they all get over excited at the sight of the food bucket, this involves coaxing them further in to their area and slamming down the escape hatch before they realise they’ve been ‘had’. This makes some of them cross and this is expressed very vocally – especially by the ocelots!

‘Enrichment’ prep followed. The reality was catching fish – 20 is the record and Cam was keen to beat it – with a bamboo pole, wire attached and a hook AFTER finding the worms which were to be bait. These fish had to be kept alive and then placed in various ponds for the animals to catch for themselves. We were also tasked with making toys in which food could be placed that made the animals ‘think’ in order to get their dinner. DT skills on alert! But when there’s no glue gun, and the only materials available are bamboo and bits of string taken off large plastic bags, the challenge can seem somewhat daunting! But, dear reader, a challenge that the mammal team rose to as one! We made TWO hanging bamboo things cleverly woven with string and wire to stop little paws getting in the obvious way. Think I’ll patent the design and flog it to ‘PetsAreUs’.

Then we did the rounds again, adding in the ocelot traps to clean up the chicken feathers from the live feed. As we were finishing off, the vet and a couple of volunteers appeared ready for ‘training’ the ocelots. They ( the ocelots, not the vet) were grumbling and growling, prowling round the edge of their area hoping an unsuspecting volunteer might leave a leg or arm within clawing distance. But we are wise to their tricks and waved the brush at them and they slunk off in a sulk.
Then the ‘training’ began. It involved getting one ocelot at a time in the separate food section and up against the edge of the wire. One lucky volunteer was charged with holding an ocelot bite sized chunk of prime meat in a long pair of tweezers whilst the vet issued a command, in firm tones, and made a hand signal to the ocelot to lie down. When he did so, again in a clear, firm tone, the vet said ‘Bien’ ( did you know ocelots speak Spanish?) and the volunteer sprang in to action proffering the meat on the end of the tweezers which the ocelot gracefully disposed of in one bite. Repeat but a different command and hand signal which had the cat sitting with its throat elongated against the bars and its mouth open. Again ‘Bien’ and the meat was gone in a gulp.

All of this is to train the cats so that injections and tablets can be administered more easily when ever they are needed in the future. They won’t be released in to the wild because they were kept as pets from kitten hood and have not been taught the hunting skills they need to survive in the wild. They are pretty crap at hunting – one of them, Alex, has the live chickens ( enrichment – making them catch their own food) released in a small space so that he will succeed in getting his dinner! Love the ocelots!

PS the cat in the pic is NOT an ocelot but another SA cat whose name I can’t remember! He has very big paws!🐾 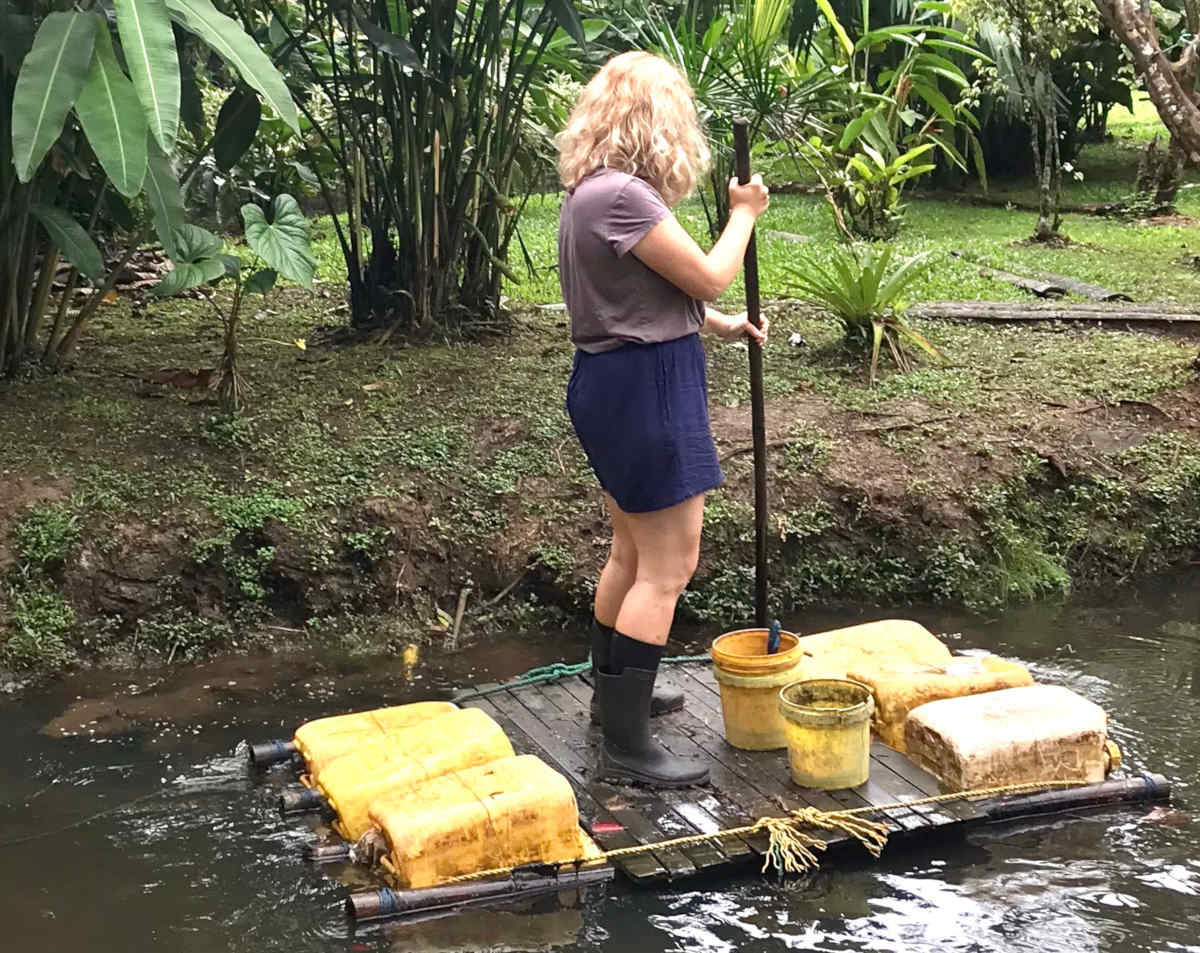 Thursday morning dawned at 6.10am precisely but I was unaware of it, as I was still fast asleep and possibly snoring! The day starts early with breakfast at 7.30 and the team meeting promptly at 8.00 ( you get compost duty if you’re even a minute late) and then it’s straight in to food prep and the rounds. Thursday was ‘monkeys’ for me – Chichico, spider, squirrel, pocket, cappuchin and one that looks like a possum. After lots of chopping and weighing to ensure we weren’t over or under feeding we set off to the chichico monkey island. Notice the word ‘island’.

There are three cuties on the island but one is a little intimidated by the other two so has to be fed on a different section of the island so 2 of the team set off to persuade her to leave the gang whilst Cam and I negotiated an underwater bridge with an underwater rope as guidance as to where to put your feet. As the water was murky and muddy and one of my room mates had missed her footing to come back with a wellie boot full of smelly, squishy mud, I somewhat nervously took baby steps peering in to the gloomy depths trying to see the bridge. Once over, we were pounced on by the monkeys who seemed to want to nest in Cam’s hair! So so cute and very tickly!

Our next assault course was the spider monkey island – this had no bridge but a punt made of planks tied together with rope and empty water containers as ballast. It was parked at the bottom of a muddy slope with a bamboo pole holding it in place. Gingerly balancing, whilst punting through the slimey waters reminded me of Days of Yore paddling a flat bottomed boat along the River Cam and stood me in good stead for the short trip across the river where two large monkeys were awaiting delivery of their breakfast! They were on the bucket like – well, very hungry monkeys! and grabbed the bananas cackling and chattering with glee.

Next the Capuchins – highly intelligent and able to open their food trap door if measures are not taken to stop them! One, Nina, has only one arm due to escaping from her life as a pet and getting it badly burnt on an electric fence. She then gnawed at it until it became infected and virtually hanging off. At this point she was handed in to the centre and the vet amputated it. She’s very nervous of the others and has to be fed a bit of food separately from them until they’ve finished the first pickings. Coaxing her away from them all is very stressful as she is totally neurotic about being anywhere near them or them even glancing at her! And as she only speaks Capuchinian, all our clucking and cooing fell on deaf ears. Lots of patience required but we got there in the end!

After finishing the rounds, we were on ‘extra work’ – just a little light concreting to raise the floor of Bambi’s ( guess the animal) pool so that water would flow out. As none of us had ever done any concreting in our lives before ( why would you have?) and had no clue whatsoever as to proportions of sand, water and cement the finished surface, interspersed with small boulders bore no resemblance at all to the smoothness associated with a baby’s bottom! A right pig’s ear! AND we used a whole bag of concrete that was supposed to do 2/3 different jobs. We were not popular ☹️