Travelling in Sri Lanka as a volunteer by Barbara Boylan 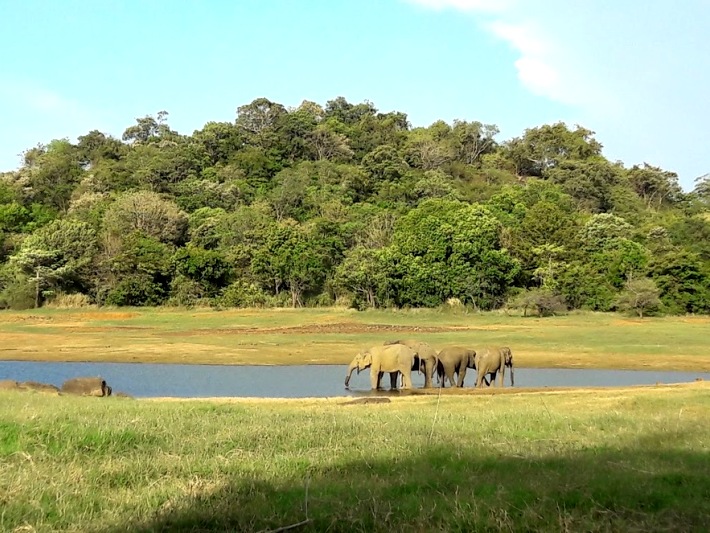 Barbara is currently volunteering in Sri Lanka, helping to conserve wild elephants that live close to small communities. Travelling in Sri Lanka can be a bit of a culture shock at times, and Barbara has been telling us amusing updates throughout her time away. Here is her most recent installment:

Dropped in to the local bus “station” by the team ready for a weekend’s exploration of the Cultural Triangle as it’s known.

The bus is the best way to travel in Sri Lanka – cheap, interconnected and though slow, an experience not to be missed! It has some of the same ‘thrills’ as the tuktuk but at a less nail biting level. So far, my experience of bus journeys has been positive; this one looked like it might be the exception.

I’ve just learnt that buses don’t go until they are full. So the timetable may read 1pm, the conductor may say 1pm, the driver may get in his seat and start the engine at 1pm – but the bus don’t go at 1pm!

It was at least 30degrees outside the bus, no breeze, windows impossible to open and plastic seats covered in polythene to preserve the plastic beneath. Every seat was full, the aisle had at least 10 people in it flapping themselves and removing clothing from chubby babies. But there was room for at least 10 more passengers so 1pm came and went. In addition the radio went on at five to the hour, a sort of warm up, blasting out thumping music accompanied by flashing red and green lights spreading like a rainbow across the statues of Buddha and various Hindu gods and goddesses that were arrayed above the driver’s front cab.

But at last we set off, the windows were cracked open and a welcoming wind whistled across those lucky enough to be near an opening. Two hours later I arrived at Dambulla, my base for the weekend  and from whence I could make my way to the wonderful, the marvellous, the awe inspiring jaw dropping Temple Caves. They date back over 2000 years and are the Buddhist equivalent of the Cysteine Chapel. Every square centimetre of wall and ceiling is painted with intricate patterns and various episodes from Prince Saddharta’s life. In addition there are whopping great big Buddha statues reclining on their sides in symbolic poses carved either straight out of the rock and painted or fashioned from wood and plaster and painted. It’s all very bling but am – a – zing!

Below is the Golden Temple and Buddhist Museum. It is a modern structure built on the principles of gaudiness and kitsch. You enter through the mouth of a grinning Buddha reminiscent of the Luna Park entrance in Sydney but with more ….. bling!

Later, I travelled to Sigiriya Lion Rock, the ancient fortress rock that rises above the plains of this region. It is at once a citadel and holy place – and a jolly hard climb up it! At the bottom it is surrounded by formal gardens, moats and remains of buildings that stood there over a millennium ago. Half way up – when your need for an ice cold beer is at its lifetime’s peak – are the Sigiriyan damsels. These are wall paintings extremely well preserved though originally there were many more of them. The damsels are painted from the waist up and are naked – apart from being adorned with bracelets, necklaces and flowers. They are well endowed buxom lasses heavily guarded by a local who preserves their modesty by not allowing photographs or videos. These are kept to buy on postcards through out Sri Lanka. They are beautiful – the original paintings not the postcards!

When you’re nearly at the top, with the final stair case before you, you pass between the toes of the legendary lion whose statue rose up to 10 metres in times gone by. Originally, you entered the citadel through his jaws but today it’s just a metal staircase.

Once at the top you’re immersed in the stumps of ruined walls that marked out this ancient strong hold. The views are spectacular. Well worth the climb.

But then you have to go down again! I was rewarded with an ice cream at the bottom which I had to defend from the rather aggressive and quite large monkey that wanted to share!

And on the way back to my hotel witnessed the very upsetting sight of two large elephants being ridden along the road by mahouts armed with prong sticks – a sharp reminder that I’m here to conserve wild elephants not just gad about. 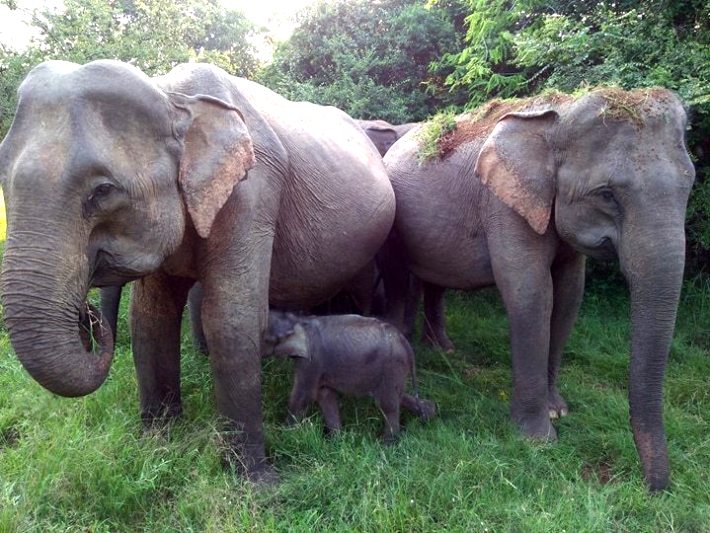 Got back to the Field House from my weekend travels just before lunch on Monday – all had gone well with the bus journey back; no problems. I felt refreshed and ready for elephant spotting!

We set off as quite a large group to either the tree house or the tank hoping for another sighting of a happy herd. So far, I’d seen elephants on every afternoon I’d been out – would my luck hold or was this the day it was going to expire?

I’d opted to go to the treehouse as this was the site where we’d spotted elephants most frequently but as we approached the fork in the road that is the division between the high road ( to the tank) and the low road (to the treehouse) grey blobs were spotted emerging from the forest. They were making their steady – and remarkably speedy – way to the water’s edge. Nellies!!

We turned both land rovers toward the tank road and, trying to quietly bump across the potholed and rutted track, edged towards them hoping they wouldn’t become alarmed and melt back in to the forest. We got as close as we dared – and because there was a comforting stretch of water between us and them, were allowed out of the trucks to get a clear view. Usually we have to stay in the vehicle so that we can exit stage left pretty nippily if the herd takes aggin’ us and charges. But this lot, though a bit twitchy, were happy to have us so close by and continued to swish mana grass about and forage.

Our view of them was amazing – they were not semi hidden by the forest but clearly visible on the exposed area beside the water. There were nine elephants in this little herd – 3 males, a couple of young ‘uns and the rest females of varying ages and size. One was a much darker grey than the rest and we wrongly assumed that this was because he was still wet from having already taken his evening constitutional dip – but no, he was just a darker grey!

Quite a few of the elephants had distinguishing features that make them easy to identify as individuals. Back at the Field House there are photos of named elephants but none of these had been spotted before. It is easier to identify the males because they have many more features :- ears torn in to frilly patterns; scars from confrontations with uppity young males; wound marks from battles with humans; pigmentation variations mottling their skin in to pink freckles. The females are more ‘perfect’ taking far more care with their appearance and living much less adventurous/ dangerous lives. One of the males in this group had a bright pink spot – quite large as we could see them clearly from this distance- on each cheek like badly applied rouge splashed on with a make up brush by a 6 year old!

I spotted that one of the ladies was heavily pregnant – it looked as though her baby’s large bottom was pressed up against the side of her as though he was having a huge stretch and feeling the parameters of his space. Most uncomfortable for his poor mother! Another female was by her side constantly, reminding me that elephants have birth partners who stay with them throughout the birth and after to provide support ( and much needed encouragement) during labour and the early days of motherhood. Elephants are amazing feminists and demonstrate true sisterhood.

Meanwhile, one of the males had started playing with one of the others. The game consisted of him pulling the other’s tail with his trunk – just a friendly little tweaky tug – which resulted in the tail being whisked away to expose his bottom. The first elephant appeared to then give the exposed rear a determined tickle with his trunk! Whereupon the tail was whisked back in to place and the routine began again. It was hilarious to watch – hard to tell if the bottom tickled elephant was annoyed or enjoying the game but the tail tugger was obviously having a lot of fun!

The largest male wandered down to the water’s edge and we humans collectively willed him to enter. He did. He drank copious amounts, squirted a couple of trunk’s worth over himself and directed more water hither and thither. Unfortunately, the rest of the herd were not so confident with us there so just this big male entertainer put on a water show. Once he was satisfied that he’d slaked his thirst and had a nice cleansing shower, he ambled out of the water, silently gathered the others in to a single meandering file, and they made their way along the side of the lake melting gradually back in to the forest one by one until the very last plopped out of sight. They looked just like the elephants in ‘Jungle Book’ holding on to each other’s tails and I expected them to break out in to ‘Keep it up, 2,3,4’ song at any moment! Alas, it was only me who whistled it.

We’d had the pleasure of their company for at least 45 minutes in what was a very special and magical sighting- undoubtedly the highlight of my trip thus far.

To find out more about travelling in Sri Lanka as a volunteer, see our elephant conservation volunteering webpage. 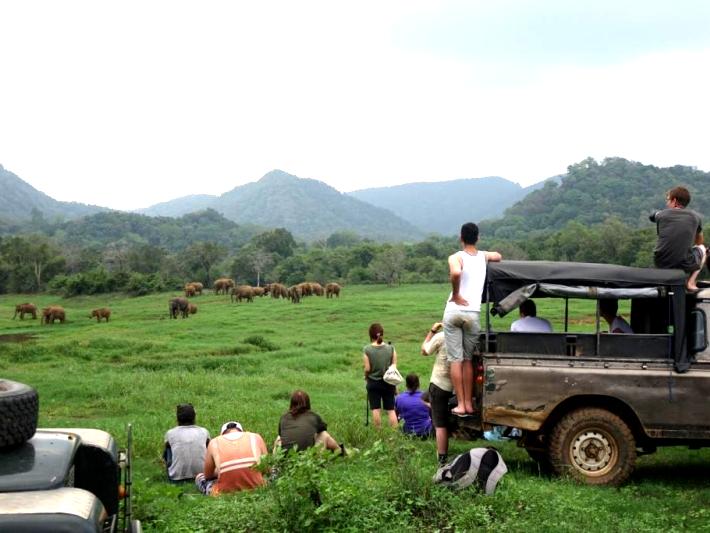